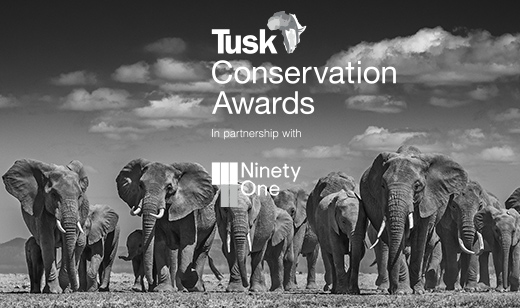 At the end of the 1980’s Africa was in the midst of a poaching crisis. Black rhino were on the brink of extinction and the African elephant population was being slaughtered at a rate of 100,000 each year. Drastic times required urgent action.

Established in response to this dire need, Tusk’s mission was to find a way to combine the interests of both people and wildlife while preserving Africa’s natural heritage.

Since its formation in 1990 by Charlie Mayhew MBE and Sir Timothy Ackroyd Bt., Tusk has invested over £30 ($40) million into over 100 projects, across the continent. HRH The Duke of Cambridge has been Royal Patron of the charity since 2005.

Tusk support projects that not only work to protect wildlife, but also help to alleviate poverty through sustainable development and education in rural communities living alongside wildlife. As the ever-expanding human population and its demand for more land brings increasing conflict with wildlife, Tusk’s aim is to forge an inextricable link between the preservation of Africa’s natural heritage and the future of its land, culture and people.

The Tusk Conservation Awards were developed in 2013, in partnership with Ninety One. The awards aim to shine a light on the incredible work of individual conservationists; to inspire, encourage and support their work, and the efforts of others across the continent.

To find out more about Tusk and the work we do, visit tusk.org